I am staying with one of the English teachers at our partner school, Mr. Nimbler.  On Saturday, we explored the vibrant medieval city of Nürnberg (or Nuremberg, as we say in America), which is located two hours from Hanau. Our first stop was the Dokumentationszentrum Reichsparteitagsgelände, or the documentation center for the National Socialist (Nazi) Party rallying grounds. We learned about the conditions that led to the rise of National Socialism and Adolf Hitler in the 1920s and 1930s, as well as the consequences of Nazi Germany. The museum is located within the unfinished and formidable remains of the Congress Hall of the former rallies. The architecture of the Congress Hall is similar to that of the Colosseum in Rome. I learned that the National Socialists were big fans of monumental, classical architecture, using it as another intimidation tool. After touring the exhibits, we climbed the steps of the stadium (located behind the museum) and looked out onto the vast field where hundreds of thousands of people once stood to hear Hitler’s speeches. Standing on the balcony where Hitler once stood, looking out onto the vast field, I could imagine what it must have been like to be there in 1934. Although it was certainly eerie to stand in Hitler’s footsteps, I now have a better understanding of why and how many of the German people got swept up in Nazi-branded fascism. Many of the World History 10 teachers, including myself, show clips from Leni Riefenstahl’s famous propaganda film, Triumph of the Will, to introduce our unit on totalitarian regimes. The film captured the 1934 party rally in Nuremberg, including footage of the Congress Hall  and stadium that I saw today. I look forward to implementing some of what I learned into our World History 10 curriculum.

Afterwards, we hopped on a quick bus ride to the medieval city center of Nuremberg. We toured a fortified imperial castle of the Holy Roman Empire. On our way to the top of the tower, we passed through exhibits on the history of German kings and admired suits of armor and medieval weapons. At the top, we took in breathtaking views of the city. I hope to use some of the photos I took in my World History 9 lessons on Medieval Europe and the Renaissance.  After our tour, we ate a traditional German lunch, including Nuremberg’s famous sausages, which are much smaller than the sausages we had in Frankfurt on Friday. We walked around the old center and popped into some impressive cathedrals filled with more medieval and Renaissance art. The trip to Nuremberg concluded with some delicious German-Italian gelato.

On Saturday evening, we attended the Abiturball, which is a graduation celebration. The event was lively. Students, teachers, parents, and siblings danced the night away to a live band made up of former students. In between songs, advisory groups went on stage to thank their advisors. Many groups wrote poems or included funny videos and pictures about their advisories. A few of the male teachers, including Mr. Nimbler, performed a choreographed dance to the Backstreet Boys, Spice Girls, and Britney Spears. It was a hit!

After a late evening the night before, we spent the morning relaxing and making both a homemade German breakfast and lunch (croissants, brezels, boiled eggs, potato noodles, and sauerkraut). After lunch, we attended a Volksfest in Aschaffenburg, which is a seasonal fair with carnival rides, games, and treats. I went on two rides and ate some delicious Bavarian gingerbread. Next, we drove to Hanau-Steinheim to watch Germany take on Mexico in a traditional Biergarten setting. We met up with most of the Pingry students and their exchange partners (all but Nicki and her partner Livia), as well as Mr. Niehues and Mr. Schumacher. Everyone was decked out in the colors of the German flag. Even though Germany lost, we all had a great time! 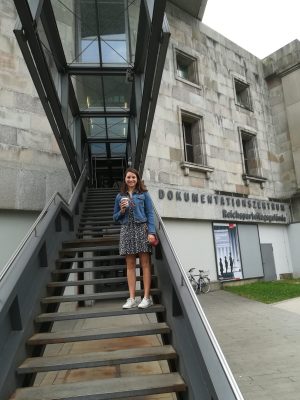 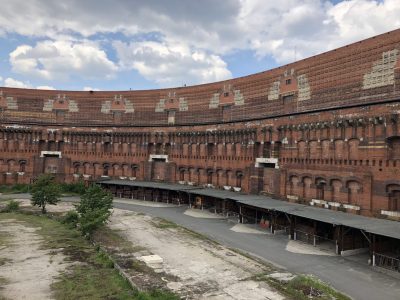 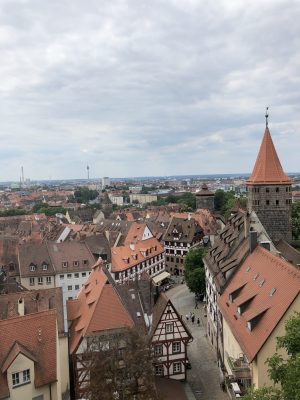 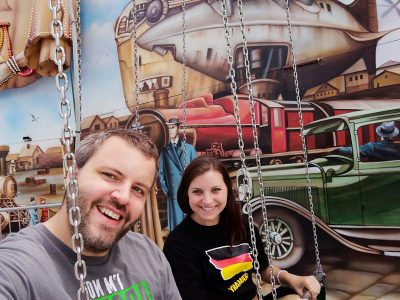