Ms. Decatur and I had asked the students to write a blog post about the weekend with their host families and we thought it would only be fair to post our impressions as well. I am staying with Mr. Schuhmacher, one of the English teacher of our partner school who had visited Pingry with 12 students in April. On Saturday morning, we went shopping on a huge outside farmer’s market in downtown Hanau. Every Saturday, fresh products from the region are offered here and many merchants invite shoppers to taste their offerings before committing to buy something. Currently, cherries are in season and I learned that the little town of Ockstadt (about 30 min away) has a great reputation for its sweet cherries. Later that morning I was able to meet with my mother as well as my brother and his family who had come from my hometown of Saarbrücken (about 2 hours drive) to Hanau. It was great to see my nephew who had just turned 5 and I could give him his birthday present in person. He still thinks I am the cool American uncle. 🙂 At 5pm, we went to the “Abiturfeier”, which is a graduation ceremony that is followed by the “Abiturball” (very similar to a Senior Prom). It was interesting to compare the graduation ceremonies on both sides of the Atlantic. The most striking difference is the fact that neither faculty nor students wear caps and gowns. However, the content of the many speeches seems to touch on similar themes. More than once were students praised for their achievements but also reminded to use their education and privilege in society for the common good. The headmaster gave the first speech and spoke with pride about the many exchange programs of his school. He took the opportunity to welcome once again the visitors from Pingry.

On Sunday, I went to downtown Frankfurt with Mr. Schuhmacher to fine-tune the preparation for our upcoming field trip. Tomorrow, only the Pingry group will visit Frankfurt and while I have been in Frankfurt many times, it was good to verify that things are still where they used to be. We watched the soccer game Germany vs. Mexico in the small town of Steinheim, which used to be a medieval city in its own right but is now part of Hanau. Steinheim was not destroyed during World War II and still features the picturesque brick-timbered houses that date back 500 or more years. Almost all students (Germans and Americans) watched the game, but all our black-red-gold decorations and cheer could not prevent the loss against a strong team from Mexico. I am looking forward to a great day in Frankfurt. We will keep you posted. 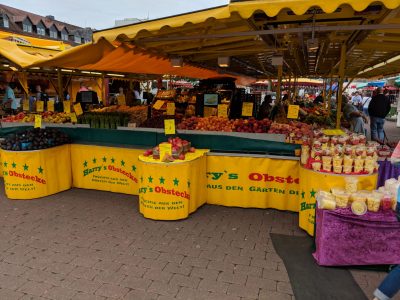 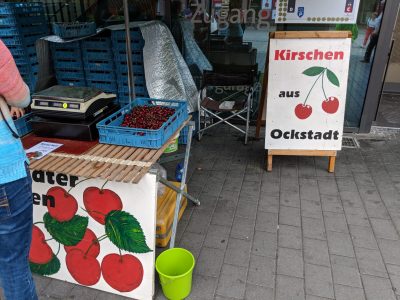