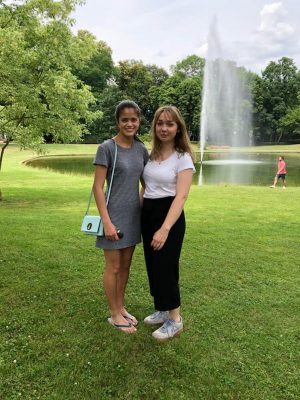 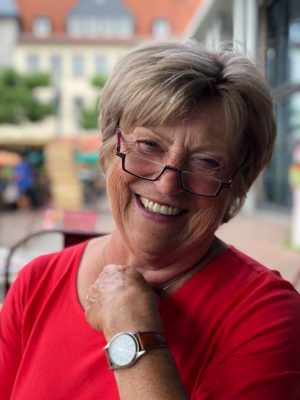 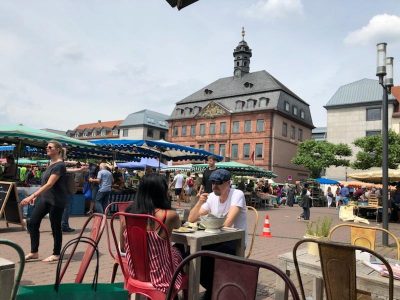 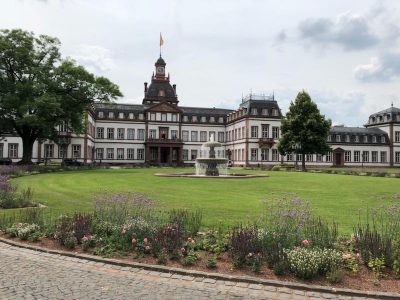 On Saturday, I was able to spend time with my grandma, who I call Oma. My Oma lives in Schwäbisch Hall and drove for nearly three hours to visit me in Hanau, which I greatly appreciate. Following her arrival in the morning, she drove Livia, my German exhange partner, and me into the city center of Hanau. Livia then acted as our tour guide and she showed my Oma and me some of the interesting parts of the city, which includes the Brother Grimm Statue, the Rathaus, and more. After walking through town, we decided to stop at Klaras, a traditional German restaurant, to eat lunch. I had Schnitzel with fries and it was delicious. We then drove to the River Main and walked along it for a few kilometers The flowing river was really peaceful and as a result, the atmosphere was relaxing and serene. Along the way, we came upon a beautiful castle called Schloss Phillipsruhe. After spending time together for a few hours, my Oma dropped Livia and I back home and she headed back to Schwäbisch Hall. Livia and I then biked nearly 10km to a get together with her friends. After a few hours, we biked back to her house. Overall, it was a nice day spending time with my grandmother and getting to know more of Livia´s friends.

Today was a very relaxed day and I was able to sleep in. Livia and I hung out at her house until the afternoon when we took a train to her brothers apartment in Mainz to watch Germany´s World Cup match. We had a nice barbecue and then we began watching the match. We are currently watching it and it has been an emotional roller coaster with many missed chances. Hopefully the rest of the match will go well!